Atlantis is a self-hosted golang application that listens for Terraform pull request events via webhooks. I’ve incorporated it in my recent engagement in CriticalStart but also I use it in my private infrastructure.

I think the idea is great for making terraform workflow more easy for infrastructure teams. With atlantis every terraform change need to go through review process. When PR is created it automatically run plan displaying its output as a comment. Applying is also done by adding a comment. It’s highly configurable.

Using atlantis allows to closing whole terraform workflow on PR page! I always had the feeling that checking out branch and running terraform locally is a waste of time. Now you can just look at plan in PR, do the review and continue with other work.
Sounds good? Let’s dig it!

In a nutshell when repository webhook is triggered by according action (like create PR or comment), atlantis receives it and starts workflow. When workflow is finished then atlantis comment on PR with result.

Note: This implies that your repo provider need to have access to atlantis endpoint and vice versa.

With custom workflows it’s possible to define exactly how terraform will be executed - flags, additional commands or even running terragrunt.

I will write here just about two topics which I think are crucial to understand atlantis - apply requirements and checkout strategy.

Atlantis allows you to require certain conditions be satisfied before an atlantis apply command can be run:

If you decide to use apply requirements then be sure to understand what they mean for your git provider. atlantis communicate with git providers via API calls and every git provider has it’s own unique API.

Apply requirements are used to limit possibility of a failure due to human error. Doing apply where there are git conflicts is silly and if your team consist of more than one person then it would be best practice to also require PR being approved before applying.

Difference between approved condition for different providers as an example:

Also each VCS provider has a different concept of “mergeability”, be sure to check it out in docs as well.

There are two strategies available:

Both of them have some valid usage. Branch strategy will checkout code on latest branch commit and run terraform. It assumes that there was no terraform changes on master in the meantime. If there were changes you will get unexpexted diff in your plan. To mitigate it you should assure that your branch is on top of them master by either rebase or master merge to your branch.
Merge strategy will create merge commit with master and run plan there.

I use branch strategy because my repo force to be on top of the master. It saves time on failed plans.

For atlantis to be functional a webhook is needed. Webhook and the git provider API are main communication channels.

In my case I did github webhook with CloudPosse module but for gitlab I had to create it manually. With atlantis documentation it was piece of cake:

If you’re using GitLab, navigate to your project’s home page in GitLab

Setup in CriticalStart was based on atlantis provider which consist of such resources:

Main resource here would be ECS Fargate task running atlantis which is exposed by ALB.

There is a bit overhead to create additional VPC and ALB and so on but it gives better isolation, which at the end of the day gives us more secure environment.

Enabling it with terraform:

In my private k8s cluster I use helm to deploy atlantis. It has it’s own namespace where only atlantis is deployed.

To prevent commiting credentials to repository where helm configuration is we need to create two secrets:

To keep such secrets in repository I use sealed secrets, which basically create encrypted Secret in SealedSecret resource. Such resources can only be encrypted with access to k8s so it’s safe to have them even in public repository although I would advice against that.

Securing atlantis is complicated topic as there are multiple ways to exploit it.

I love it!
Working with terraform has never been easier for me.
It needs a lot of love in the beginning to get everything right but after that it’s smooth ride.

Main issue for me is security. A lot of privileges for atlantis means blast radius is gigantic. Anyone that can access atlantis app, send webhooks, comment in PR, etc can break whole infrastructure to which atlantis have access.
The risk is not just internal, atlantis is exposed so additionally it’s another large surface attack vector.

At the end of the day if you can “afford” atlantis it’s definitely worth the effort! 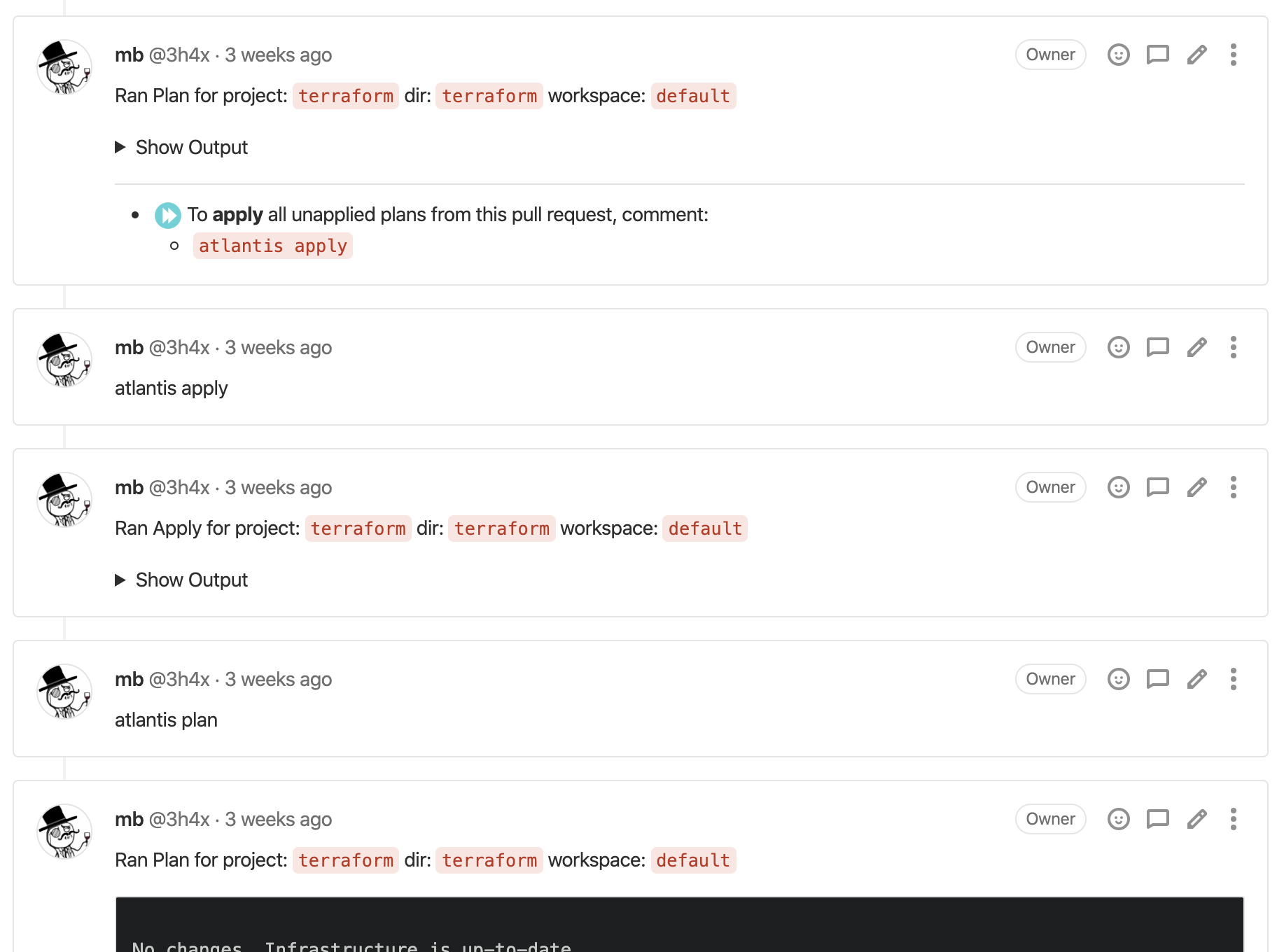